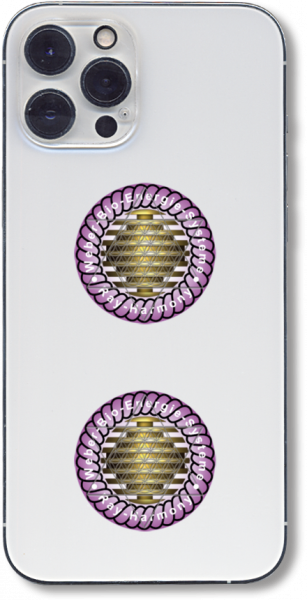 The mobile phone chip with the energy of three-dimensional embossing to harmonize mobile phones and other electronic devices.

The advancing mechanization of our everyday life and also the probably increasing radiation level of smartphones (UMTS and, LTE network, etc.), laptops, tablets, TV sets, computers, portable phones, W-LAN devices, etc., has made it necessary for us to adapt our Weber-lsis® Ray-Harmony-Chip to the current standards. Therefore, we have decided to now offer you a new, enhanced and stronger model. The new Weber-lsis® Ray-Harmony-Chip shows in the middle a representation of the Weber-lsis® Merkaba- Sphere. The Weber-lsis® Merkaba Sphere probably has the property of being able to radionically build up a small external Merkaba field. A Merkaba field can be a completely unfolded, highly vibrating light force field, which surrounds the human being and all life forms, all planets as well as galaxies. The image of the Merkaba Sphere (radionics principle) on the Ray Harmony Chip is believed to contribute greatly to harmonizing electromagnetic radiation. The Merkaba sphere is surrounded by a wheel of fire flames consisting of 33 individual flames. The fire-flame-symbolism is a kind of light-language, through which possibly positive protective information is transmitted. The fire flame wheel just mentioned is graphically based on a crop circle pattern from 1998 at West Kennett Long Barrow, England. In the number 33 (master number) we see a connection to spiritual elements. In our opinion, the increasing mechanisation of the third-dimensional world also brings with it the need to return to spiritual values, even if they are only of a symbolic and numerological nature, as in the diagram of the crop circle. Perhaps one or the other makes his own thoughts about it. 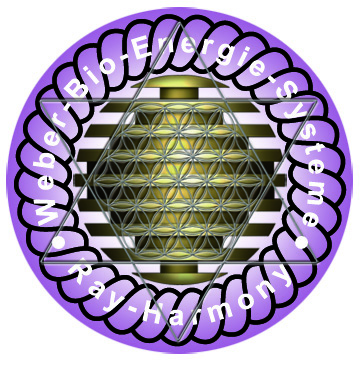 The new Ray-Harmony-Chip is embedded in the colour violet, the colour of transformation (purification and the property of being able to transform negative impulses into positive ones). In addition, we have imprinted a star tetrahedron and the geometry of the flower of life on the Ray Harmony Chip. The star tetrahedron is a perfect symbiosis of feminine and masculine elements, as it can be found everywhere in the universe as a principle of creation. Furthermore, the star tetrahedron is a component of the Merkaba. The flower of life is an archetype (morphogenetic structure) for the matrix of creation. According to this archetype, the whole universe and all life forms contained therein have presumably built themselves. Before the Weber-lsis® Ray-Harmony-Chips are delivered to customers, they are irradiated and charged for approx. one week with a Weber-lsis® large orgone radiator 1:3 (energy and information transmission device) with numerous positive frequencies for the harmonization of possible electromagnetic vibrations. The carrier foil is made of aluminium. The strong adhesive layer on the back is suitable for adhesion to plastics as well as metals. We recommend to place the Ray-Harmony-Chip on electrical devices as close as possible to the battery (which has been taken out of the device} or transformer (on mobile phones and smartphones where the battery can still be taken out). If the Ray Harmony chip is placed on the outside of the case of a smartphone (preferably in the middle of the device), we recommend placing a plastic clear adhesive film over the chip to protect the Ray Harmony chip. When applying the Ray Harmony chip, it is important to ensure that the grooves of the Merkaba sphere printed on the chip are always applied as horizontally as possible to the device, roughly in the same way as the smartphone is held when making a phone call (see the various illustrations)

Electric radiation - where does it come from?

ln our modern world, they are now almost part of the furniture - electronic equipment for every need. Modern technology is spreading inexorably throughout our homes and workplaces. What a blessing for mankind, which is opened by it ever faster communication ways. However, due to the many microwaves that can emanate from the individual devices, more and more suspected physical reactions have probably crystallized.

Possibly the following symptoms can occur:

Headaches, inner restlessness, nervousness, insomnia, lack of concentration and cardiac arrhythmia without any apparent physical reason, to name just a few of the symptoms. There is probably a connection between mobile phone radiation and the eventual physical malaise. We have found out how you can probably protect yourself against the possible radiation.

Can electrical devices actually cause harm?

The sensitization of humans to electronic microwaves and impulses that can possibly come to light through the use of mobile phones and co. is now understandable to many people. Some people know the feeling of hot ears after a long conversation with a mobile phone. In the past, with the old mobile phones, there was only one antenna to pull out. Nowadays, 5 or more antennas are built into a smartphone

to keep all the functions we love going all the time. This sensitization to electric radiation is now probably a known symptom of possible negative conditions of the organism. We cannot make the microwaves of the mobile phones disappear, but to transform them into a tolerable vibration can probably be achieved.

How it works
Many people are probably aware of the possible exposure to radiation when using mobile phones. The Weber-lsis® Ray-Harmony works according to the principles of geometric shape radiation, color vibrations, radionics, as well as positive imprinted information and can thus probably harmonize the electromagnetic microwaves of the mobile phone. It can thereby possibly reduce and transform the presumably impairing effect of the radio waves. As a result, the Weber-lsis® Ray-Harmony can probably raise the well-being of the mobile phone user both while on the phone and when the mobile phone is ready to receive. When the mobile phone is in standby mode, it is conceivable that the body's energy field is probably harmonized and stabilized.

The Weber-lsis® Ray-Harmony-Chip is a sticker made of aluminium foil (as a storage medium similar to a computer chip) and is stuck on the back of the inner surface of the mobile phone when the battery or the back plastic cover is removed. If the smartphone can no longer be opened, we recommend sticking the Ray Harmony chip to the outside of the case and placing a clear plastic adhesive film over the chip for protection. The best harmonization of mobile phones can be achieved by using the Weber-lsis® Ray-Harmony-Chip in combination with the lsis-Beamer 1:1. My recommendation is to use the smartphone as little as possible and to fall back on the landline if possible. With the newer generation smartphones, it is recommended to place 2 Ray Harmony chips on the back. 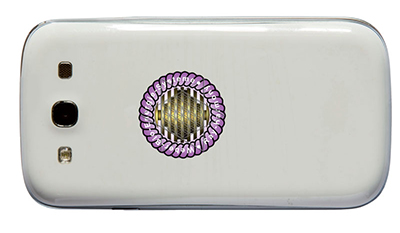